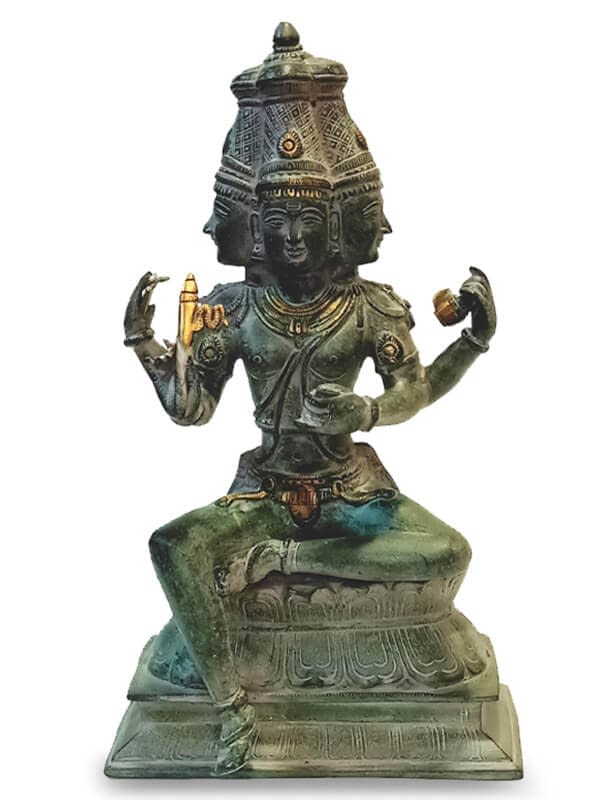 Made in solid brass with patina finish.

As depicted in the Hinduism, Brahma is the creator of the universe and of all beings.

The Vedas, the oldest and the holiest of Hindu scriptures, are attributed to Brahma, and thus Brahma is regarded as the father of Dharma (the nature of reality).

Brahma is one of the Trinity. He is to be found to exist more in scriptures than in homes and temples.

The Birth of Brahma :
According to the Puranas, Brahma is the son of God, and often referred to as Prajapati (Father of the people).

The Shatapatha Brahman says that Brahma was born of the supreme being, Brahman, and the female energy known as Maya (a supernatural power).

Wishing to create the universe, Brahman first created the water, in which He placed His seed. This seed transformed into a golden egg, from which Brahma appeared.

According to another legend, Brahma is self-born out of a lotus flower which grew from the navel of Vishnu. According to the Brahma Pura, he is the father of Manu, and from Manu all human beings are descended.

In the Ramayana and the Mahabharata, he is often referred to as the great grandsire of all human beings.

Brahma is traditionally depicted with four heads, four faces, and four arms. With each head, He continually recites one of the four Vedas.

He is often depicted with a white beard, indicating the nearly eternal nature of his existence.

Unlike most other gods, Brahma holds no weapons. One of his hands holds a sceptre. Another of his hands holds a book. Brahma also holds a string of prayer beads called the 'akshamala' (literally "garland of eyes"), which He uses to keep track of the Universe's time. He is also shown holding the Vedas.

Lord Brahma bless the universe with creativity and knowledge to solve mankind's woes. Lord Brahma is worshipped for the divine knowledge of the Vedas and aligning with the eternal truth.

Brahma presides over 'Brahmaloka,' a universe that contains all the splendours of the earth and all other worlds.

Design: Made in heavy solid brass with patina finish.Brass is well known for its grasping capacity. It grasps the divine spirit upto 30%, when compared to other metals.  The spiritual vibrations are attracted towards these shining idols easily.